Issho-Ni means “together with” in Japanese. Located in Shoreditch, Issho-Ni is a chic Japanese restaurant & cocktail bar. A place where people can gather to enjoy good food and drinks in a relaxed atmosphere.

Our concept is simple, we serve delicious small sharing plates of Japanese food, Izakaya style. Our head chef created the menu with a twist on Japan’s traditional dishes alongside our head bartender to create cocktails that complement each dish. 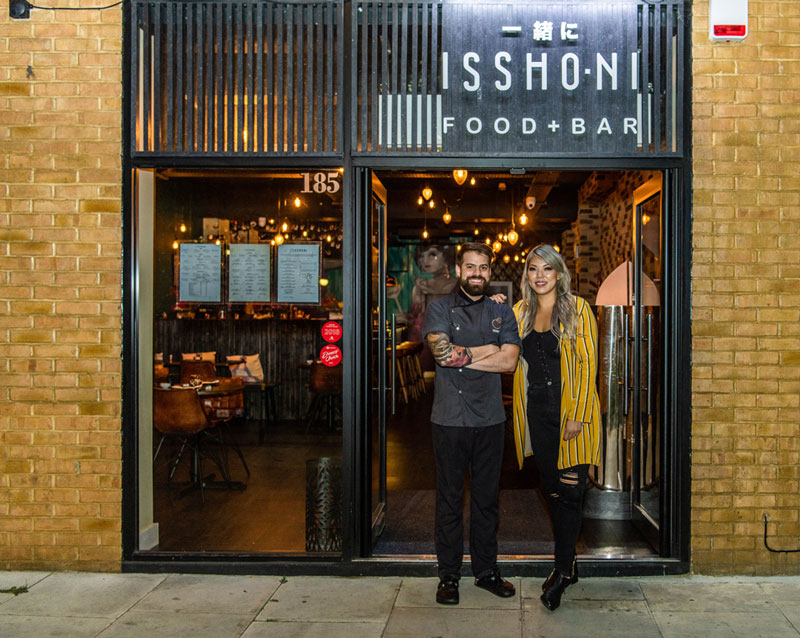 Passionate about food and drink she travelled the world to seek new and innovative ideas to bring back to London. Her all-time favourite place was Japan, which inspired her to open her very own Japanese restaurant, to share her knowledge and passion of their culture, culinary skills and understanding of simple flavour.

She has a pastry background and creates one-time limited desserts that when they are sold out they are sold out. Issho-Ni at 185 Bethnal Green Road has sentimental value to the family as previously it was the first noodle bar (Noodle King) to open in the area by her parents, which fed many local families.

Now following the footsteps of her parents with a story and legacy to tell Claire created a place where people can gather to enjoy good food, drinks, great atmosphere Issho-Ni (together).

Starting his career in the traditional Japanese way, Eduardo’s first kitchen job was washing dishes at Keiseki restaurant Soseki, in the City of London. It wasn’t long before his ambition to learn more was spotted by the head chef.

Going through a full sushi chef apprenticeship he was able to absorb skills essential to running a Japanese kitchen and has now worked in several high profile restaurants including Roka, Moshi Moshi and Chisou. He has vast experience in opening new restaurants and creating menus for Kiri and Bone Daddies.

Now as head chef at Issho-Ni, Eduardo can showcase his culinary skill and passion for the Japanese cuisine as he creates beautiful sharing plates of Japanese food and sushi

Both Claire and Eduardo believe that fresh and top quality products should be cooked and presented simple yet tasty. Everything has a purpose on the plate. Flavours, garnish, sauces, texture, colour is important in every dish and to every cocktail.

Previous
Next
Go To Top